MONTHS
JULY SUGGESTIONS FOR TEACHER PREPATIONAUGUST
KALO AS A MAIN COURSE IN HAWAII’S HISTORYSEPTEMBER FOOD AND HEALTH. WHAT DO THE STUDENTS THINK OF EATING KALO)OCTOBER
THE GLOBAL LŪ‘AU. HOW DOES KALO FIT INTO THE WORLD FOOD SUPPLYNOVEMBER
AHUPUA‘A & FARMING, MAUKA (MOUNTAIN) TO MAKAI (OCEAN)DECEMBER
HOW MANY KINDS OF KALO CAN I EAT?JANUARY
HOW MUCH DOES IT COST TO GROW AND EAT KALO?FEBRUARY
FEED YOUR ‘OHANA.MARCH
WHO IS KAPUNA?APRIL
FOOD SECURITY AND TECHNOLOGY: WHAT ARE THE EFFECTS ON OUR FOOD?MAY
HARVEST, LŪ‘AU, WHAT ARE YOUR PLANS?

The global lū‘au. How does kalo fit into the world food supply?

Understand that science, changes in the environment, and society are interrelated.
‍
1. Objective: Name other countries where communities eat kalo.
2. Objective: Identify other communities that use a traditional food to pass on their culture.

1. Identify other countries that eat kalo and learn the names they call it. Use a map to locate these countries and visualize kalo’s path from China and Egypt to Hawai’i. 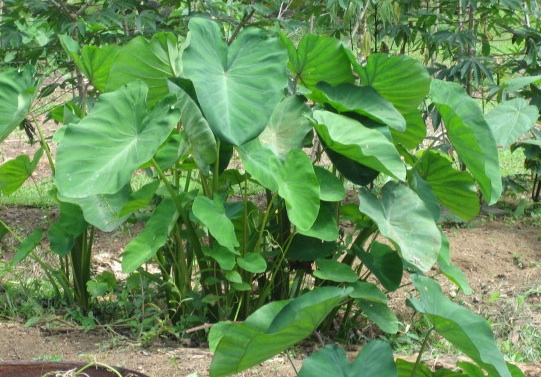 2. Read this passage from Taro varieties in Hawai‘i, Bulletin 84 of the Hawaii Agricultural Experiment Station of the University of Hawaii (1939, pp. 6-8) to understand where kalo was first viewed as food.

'Taro was mentioned in Chinese books as early as 100 B.C. It was evidently thriving in Egypt at the beginning of the Christian Era, as Pliny (23-79 A.D.) refers to it as one of the established food plants of the country. The accounts of the early European navigators tell of the cultivation of this crop in Japan and the Western Pacific islands and as far south as New Zealand…'

4. Listen to this podcast, In Highland Peru, a Culture Confronts Blight. min. 7:38. By Joanne Silberner of National Public Radio. Link to NPR.org.

On the same webpage, listen and view the audio slideshow, Blight on the Horizon. min. 3:31. By Jane Greenhalgh of National Public Radio. Link to NPR.org.

Identify similarities between Andean Indians and Hawaiians in the way the Indians value their potato varieties.

5. Use these crop statistics to build a bar graph to compare kalo production in the United States with other crops:

6. View this video, T.T. Chang discusses the value of rice’s diversity. min. 0:45. By the International Rice Research Institute (IRRI). Link to Youtube.com. Discuss the value of having many varieties of rice, and the challenges in maintaining the varieties.